FPS, Miss Frames Per Second (Jolteon and Ina like to call her this)

Does this shape have a virus?

Crushing on, married to, or dating

Injured and corrupted (as of latest BC chapter)

Is it okay to animate this character?

Yes, with credit or permission
Four (in the lore pertaining to Blerix's Corruption) is the fifth Hero and the only Heroine. She was not originally intended to exist but as Blerix, and at that her corruption, was awakening beneath the Tree of Life, it knew it needed another Hero who could better handle the threat that would otherwise corrupt everything.

Her corrupted counterpart is Frontlines.

Four has a lot of backstory that is contained in a book. You can read the original (non-Pink Corruption) version of her backstory on DeviantArt or Quotev, but the Pink Corruption version is a work in progress currently due to being much longer and having more characters. It is, however, published, under the name Blerix’s Corruption.

The lore behind her strange appearance in comparison to the other Heroes ties into her not originally being intended to exist. The Tree of Life would normally spend an entire year slowly creating and designing a hero after the hero before them gets released, but since there was only supposed to be four heroes, the Tree only started on Four a week before her release. Because of this, it’s evident that she was much more rushed than her brethren.

Four has a small pink bandana that is wrapped around her top left point (our top right) and has a strange tie. Curiously, she is bigger than the other Heroes and has longer legs as well as an upside down triangle mark. She also strangely has the facial features of Lycanthropy, aside from white eyes.

In matured form, she usually has her hair in a ponytail or braid, and she wears a large bright pink skirt. On the rare occasion that her hair is down, it may still appear to be in a ponytail.

She is sweet and kind like Cyan and Tsavorite, but also has a wild nature and a spark-like curiosity. She's energetic but much more mentally "mature" than her fellow Heroes, acting more like a teen than a child. Four also has a better understanding of Blerix's Corruption and is able to talk to families about the shapes who choose to be corrupted despite its downsides.

Four is much more aggressive in battle than other Heroes, and doesn’t get overexcited easily. She's sweet to most shapes, but can be very competitive with rivals and will always try to be the best out of them.

If she is accidentally matured or enters her Overclocked form, she will become able to manipulate fire in some way. It seems this was done on purpose by the Tree of Life for some reason.

It sounds similar to the vocal clips from Colorblind by Panda Eyes, but higher pitched and made into a voice beep. I can imagine how her laughter would sound, but I can't make a clip of it due to not having any voice bleep making programs. 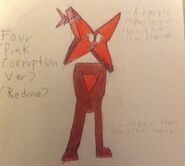 Outdated art of her and Cyan, improperly matured

Community content is available under CC-BY-SA unless otherwise noted.