Extor at a very young age.

Does this shape have a virus?

Crushing on, married to, or dating

Is it okay to animate this character?

U need Permission :)
Extor is the second hero that was ever created.

Extor sadly had no caretakers to raise him. So Mint raised him. It was hard though, because Mint had to raise him and Protect the tree of life at the same time. Because of this, Mint had almost no free time on his hands. 3 years later, a big accident occured when he was at home. A very big tornado came, sweeping through Mints house, causing Mint and Extor to fly away in different directions. Mint landed with a thud 53 miles away from paradise, while Extor crash landed in a forest, causing him to lose 3/4 of his head. He became the only accidental Foracircle (Circle + Hole) in all of paradise. He was found 1 year after the Fourth Pink Corruption.

He is a Sherbet Orange Foracircle with a star marking on his chest.

He is a sweet kind shape with no intentions to hurt anyone (Except his rivals). 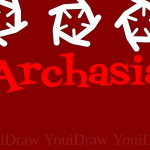